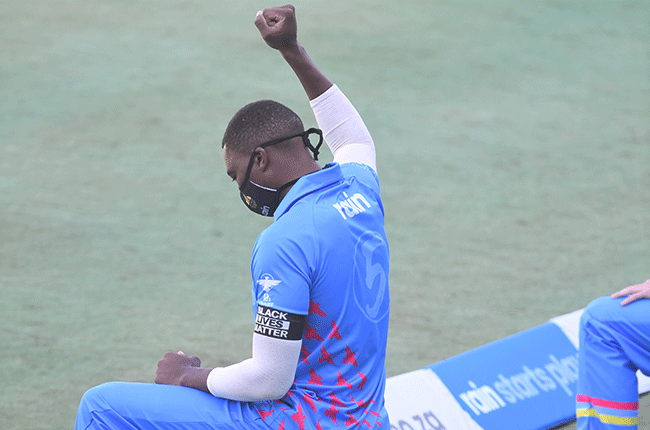 A week of race controversy for South African cricket ended on Saturday with the sport’s return to live action in the country.

An unusual match involving three teams was played in an empty SuperSport Park in Centurion, making it difficult to judge whether the new form of the game, branded 3T Cricket, had the potential for major spectator appeal.

It was the first major televised sporting event in South Africa since the coronavirus lockdown in March, and came days after 30 black former South African international players alleged in a letter that racism still affected the sport.

The 24 players involved on Saturday were united in wearing Black Lives Matter armbands. Before play started there was a minute of silence for victims of the COVID-19 virus followed by all the players taking a knee in solidarity with the BLM movement.

Makhaya Ntini, the former Test fast bowler who played in 101 Test matches, was one of the commentators.

He did not refer to an emotional television interview on Friday in which he said he felt lonely during his international career because he did not feel included in off-field activities involving groups of team-mates.

Ntini said his loneliness extended to sitting alone in hotels at breakfast time. He also said his much-publicised habit of running between hotels and grounds rather than travelling with other players on the team bus stemmed from his feeling of exclusion.

Graeme Smith, South Africa’s director of cricket, was one of Ntini’s captains but if there was any ill feeling it was not in evidence when they were on air together on Saturday, with Ntini saying “we stand together” at one point in his conversation with Smith.

Smith came out strongly in support of Black Lives Matter on Friday.

Saturday’s match featured three teams of eight players each, with no regional identity. The Eagles, a team captained by AB de Villiers, were the winners with a total of 160 for four from 12 overs, with six overs each bowled by the other two teams. De Villiers hit 61 and Aiden Markram scored 70.